Corroboree is the aboriginal word for a gathering or meeting. Its meaning however is much more complex. It includes not just the idea of a physical bringing together of tribes, but a meeting of minds and philosophies, of gradual growth - a gathering of momentum as the tribes arrive. They require much preparation, the gathering of thoughts, strengths and dreaming. And they require the traditional adornments: yellow ochre stripes across dark aboriginal skin.

That a frog adorned with these very same markings would be called the Corroboree Frog is not surprising, but that we would have to call a modern day corroboree to save it was unexpected.

Only a few hundred Corroboree Frogs remain and their numbers are dwindling fast. It will take a gathering unlike any called before for us to be successful in saving them. As our most skilled frog scientists gather their knowledge and ideas, we hope to gather our "tribes", to bring together the schools of Victoria to a place of action. To a breeding center where cutting edge science will work to save one of our country's most ancient treasures by use of one of Australia's oldest traditions: a gathering of our peoples, thoughts, strengths and action… a Corroboree.

Project Corroboree is, very aptly, the first project on frogs.org.au to include an online meeting-ground. In the frogs.org.au Community you can share your thoughts on the corroboree frogs and disappearing frogs with users of the site. You can contribute ideas and get feedback from other visitors.

School groups have their own private section in the "School Zone" - this is a special area designed for communication between the schools who have already helped out in all kinds of ways with the protection of the corroboree frog.

Corroboree... on the mountain 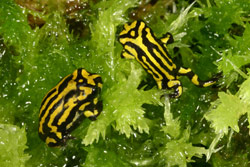 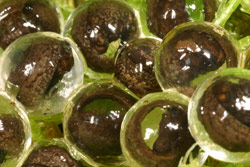 For tens of thousands of years highland aboriginals gathered on Mount Kosciuzsko each summer to feast on Bogong Moths. It was here, once a year, that all the tribes came together to celebrate a period of plenty. It is not hard to imagine the Mountain alive with the sound of the moth hunters' corroborees. At the same time another gathering was on in earnest: a diminutive little frog, who had occupied the mountain since long before the dreaming began, was gathered for the summer breeding season. The Mountains were surely alive with the sound of their chorus, Australia's most ancient Corroboree…

Gone are the days when the Mountain rang with these sounds, gone are the moth hunters and the frog corroborees. The largest gathering the frogs can now muster numbers just 30 calling males. The Southern Corroboree Frog languishes on the very edge of extinction.

In 2001, the International Union for the Conservation of Nature (IUCN) assessed the Southern Corroboree Frog to be Australia's most endangered frog. Our own Government lists its status as Critically Endangered - the highest rating of endangerment available. To be the most endangered species of what is unquestionably the world's most troubled group of animals, frogs, is no honor. To allow the sound of the last corroboree on Kosciuzsko to fade to extinction is unacceptable. We must act, and can only act NOW.

The Scientific Advisory Panel to the Recovery Team for the Southern Corroboree Frog is adamant: our last hope is a captive-breeding program the likes of which has not been seen in the captive conservation of frogs and comparable to the most ambitious breeding program for any non-commercial animal species. Unanimous support for this action has also been offered by the New South Wales Government's Scientific Advisory Group, the WWF's Science Advisory Council and the Frogs! Programs Scientific Panel, a team comprising Australia's foremost frog experts.

Corroboree aims in the short term to prevent the extinction of the Southern Corroboree Frog via a captive-breeding program. Beyond this we aim to ensure its recovery to a point where it no longer needs assistance.

The magnitude of the project that we are proposing is daunting even from just a science and conservation perspective. Its scope however must be much broader. We must invest substantial efforts in making our work accessible to the broader community. The current favour afforded frogs generally, coupled with the iconic nature of this frog in particular, makes this program the ideal candidate for this activity. We are calling on the Australian community and most particularly on the schools of Victoria for assistance.

The design and construction of facilities for Corroboree has required and will continue to require enormous human and financial resources. Our plan is to invite schools to send groups of students to participate in both the design and construction phases of these new facilities at the ARC. Working bees comprising students, teachers and scientists will build and equip enclosures, install rain systems, collect plants and other materials from Kosciuzsko, and create the landscapes of the Australian Alps inside a series of refrigerated rooms. In the long term it is hoped that continuing interest from schools will see students rotating on work-placements and future working bees to the ARC, collaborating with scientists in the care, breeding and release of Corroboree frogs. Web conferencing (in the frogs.org.au Community) and live feeds will keep the rest of the school community involved and planning, data processing as well as the raising of funds and awareness, can be taken up by schools, in their local community. Our pre-existing collaboration with university partners will ensure a steady supply of postgraduate researchers to involve secondary students in investigations of specific questions relevant to the conservation of Corroboree Frogs.

Corroboree will be resourced through: The Amphibian Research Centre (ARC), the WorldWide Fund for Wildlife (WWF) and the WWF/Rio Tinto Frogs! Program, the Victorian Frog Group (VFG), Melbourne and Taronga Zoos as well as other partners as they can be found.

We invite you to join our Corroboree and assist in the conservation of one of our country's most remarkable creatures. Only by working together can we ensure that Kosciuzsko has not yet heard its last Corroboree…

The Corroboree Frog has been the subject of scientific and media interest for some time now. Its rapid decline in population began as a complete mystery but gradually (through research, study, and ongoing experiments) we are uncovering the threats to the species and the possible methods of recovery.

Or simply help save the Corroboree Frog by making a donation.